What’s in your Sugar?

Did you know there have been lawsuits about poor quality bee feed?

A few months ago, I watched Dr. Rob Currie’s (of the University of Manitoba) presentation to the Manitoba Beekeepers Association on “The Importance of Quality Feed for Bees” which is available at www.manitobabee.org. I learned that in 1995 some “off-spec” corn syrup had been imported into Manitoba. Many beekeepers who bought this syrup lost hives, and Dr. Currie’s later investigations in the lab and in hives showed that bees fed off-spec syrup were much more likely to die than bees fed with standard corn syrup. He mentioned that the lawsuit filed by the beekeepers who bought the off-spec syrup was not settled until 2019! Dr. Currie’s talk highlighted the real implications for beekeepers of knowing what makes up their sugar syrup. Beekeepers need to be sure that the syrup they’re purchasing is high quality, and not off-spec. In Canada, there are three main sugar syrups that are fed to bees, and as they come from different plants, there are considerations to be had when making the decision on what syrup to feed to your bees. 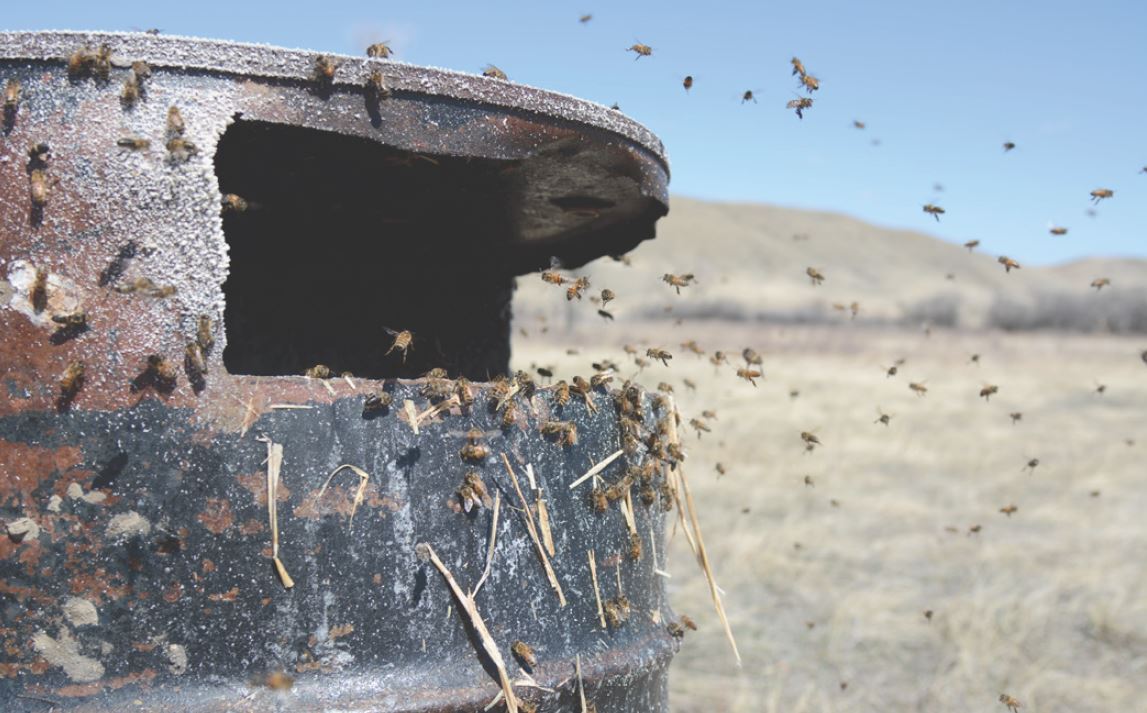 Beet Sugar – In most years, the majority of Albertan beekeepers feed beet sugar which is produced by the Lantic/Rogers factory in Taber from sugar beets grown in Southern Alberta. We toured this factory in 2019 as part of the Southern Alberta Beekeepers Meeting and learned that the Alberta Beekeepers are their #2 client (after Coca-Cola). The Alberta Beekeepers are also their most reliable client because Coca-Cola sometimes chooses to obtain sugar from another source. In Dr. Currie’s presentation he mentioned that he has done many feeding trials and always finds that sucrose (the type of sugar in beet syrup) is the gold standard for bee feed, so it is wonderful to have a local source of it in Alberta! In the fall 2019 there was a failure of the sugar beet crop, so most of the sugar that beekeepers fed in 2020 was brought in from Lantic/Rogers in Vancouver and therefore was cane sugar.

Cane Sugar – Sugar cane is grown in tropical countries where it is partially refined after harvest, and then shipped and further refined at factories such as Lantic/Rogers in Vancouver or Montreal. Once refined, this sugar is also sucrose (very good bee feed) and very similar to beet sugar. However, because it comes from a tropical grass, cane sugar is a C4 sugar while Beet sugar is a C3 sugar (more on this in the chemistry section).

Corn Syrup – High Fructose Corn Syrup (HFCS) is extensively fed to bees in the US and eastern Canada (including Manitoba), but is not commonly fed in Alberta. As its name implies, it has high levels of the sugar fructose but also contains glucose. Dr. Currie also mentioned that his studies have found that HFCS is not as good for bees as sucrose. Additionally, if HFCS is heated, it produces a chemical called hydroxymethylfurfural (HMF) which can harm the digestive tracts of bees and potentially kill an entire hive. It tends to be much cheaper than sucrose in the areas where it is commonly used as bee feed. Corn syrup is also a C4 sugar.

Did you know? Molasses is a by-product of sugar cane processing, but beet molasses is non-food grade, so its mostly used for yeast production or animal feed.

Due to rampant honey adulteration, honey is extensively tested for the presence of sugars to determine if: 1) honey has been directly diluted with a sugar syrup, or 2) if bees have been fed with a sugar syrup to make “honey”. Two of the laboratory tests commonly performed when honey shipments are checked for adulteration are a sucrose test and a C4 sugar test. The sucrose test analyzes the percentage of sucrose in honey. As natural honey typically contains glucose and fructose with very low levels of sucrose, the presence of sucrose at certain levels indicates honey that is not natural.

Therefore, if bees were fed sucrose and the resultant honey extracted, they would fail this test (5% is a common “fail-rate”). The C4 sugar test tests for the presence of C4 sugars in honey. C4 is a photosynthesis pathway unique to tropical grasses (such as corn or sugar cane), so it can be used as a test for honey adulteration because bees would never collect nectar from a C4 plant (for more information on this, see Dr. Shelley Hoover’s article in the January 2021 edition of Hivelights). Therefore, if bees are fed cane sugar or corn syrup and the resultant honey extracted, they would fail the C4 sugar test (7% is a common fail-rate). However, due to beets being a C3 plant, if bees are fed beet sugar and the resultant honey extracted, the honey would pass the C4 sugar test, but would fail the sucrose test.

Interesting side note: Manuka honey sometimes fails the C4 sugar test and no one currently knows why.

All this chemistry becomes relevant when beekeepers are trying to keep their bees fed during very late and cold spring seasons, or have bees located near uneducated beekeepers. Here are a few examples of when beekeepers should be concerned:

1) Due to long rainy periods with almost no dandelions to provide nectar, the bees might require syrup in early to mid-June. If the weather changes suddenly and the honey flow quickly comes on in mid-June or early July, the bees may not consume the syrup and instead store the syrup in the honey supers.

2) An uneducated beekeeper is barrel-feeding syrup to nucs in July, and nearby bees owned by another beekeeper forage on it and deposit the sugar syrup into honey supers.

There is a possibility in these cases for the beekeeper’s honey to fail C4 sugar tests or sucrose tests. Therefore, it is important that if beekeepers suspect that if any sugar syrup may have gotten into their supers (due to late spring feeding or irresponsible neighbors) to have any associated shipments of honey tested before they leave the farm. Some of the labs accepting honey samples are Intertek and Labs-Mart. Beekeepers should also check the paperwork on their syrup shipments to be aware of what type of syrup they may have received. Derrick at the Alberta Honey Producers is working with Lantic/Rogers to ensure that all sugar syrup shipments are clearly labelled to indicate the source of the sugar syrup (cane or beet).