There are many reasons one would choose to divide a strong, healthy colony. One is to prevent bees from swarming off into your neighbor’s yard.  Another reason is to make nucs or packages and sell to make some extra cash, or to expand your own operation.

One important question you will ask when checking your colonies early spring is ‘Are they strong enough to be split?’. If the colony has only 1 to 2 frames of brood, they are definitely not ready. But if they have more than enough brood and bees, you can split! Be careful: Dividing a colony in two may result in two weak colonies. Generally, (and I say generally because it is not always the case as we will learn here) the parent colony should not be reduced so much that it can no longer make a full honey crop

There are about as many ways to make splits as there are beekeepers, because everyone has their own climates, needs, and time constraints.  We will outline a few methods below using single brood chamber colonies as a model, but you should work with others and experiment to find a splitting method you like and that works well for you.  Most often, a new colony is made from either a strong single parent colony or from a two-parent colony.

5. The hive equipment of the split colony should be bee-tight. Make good use of beekeeper’s best friend duct tape and seal any gap of hole from where bees could escape. Entrances should be reduced in the first few days to slow bees’ flights and prevent robbing. Use entrance reducer or close the entrance with grass.

6. Parent colony will receive empty drawn comb and, in the case of doubles, may also have the brood chambers consolidated, if desired.

7. If making multiple splits, place each well sealed split in the shade to keep the bees cool. 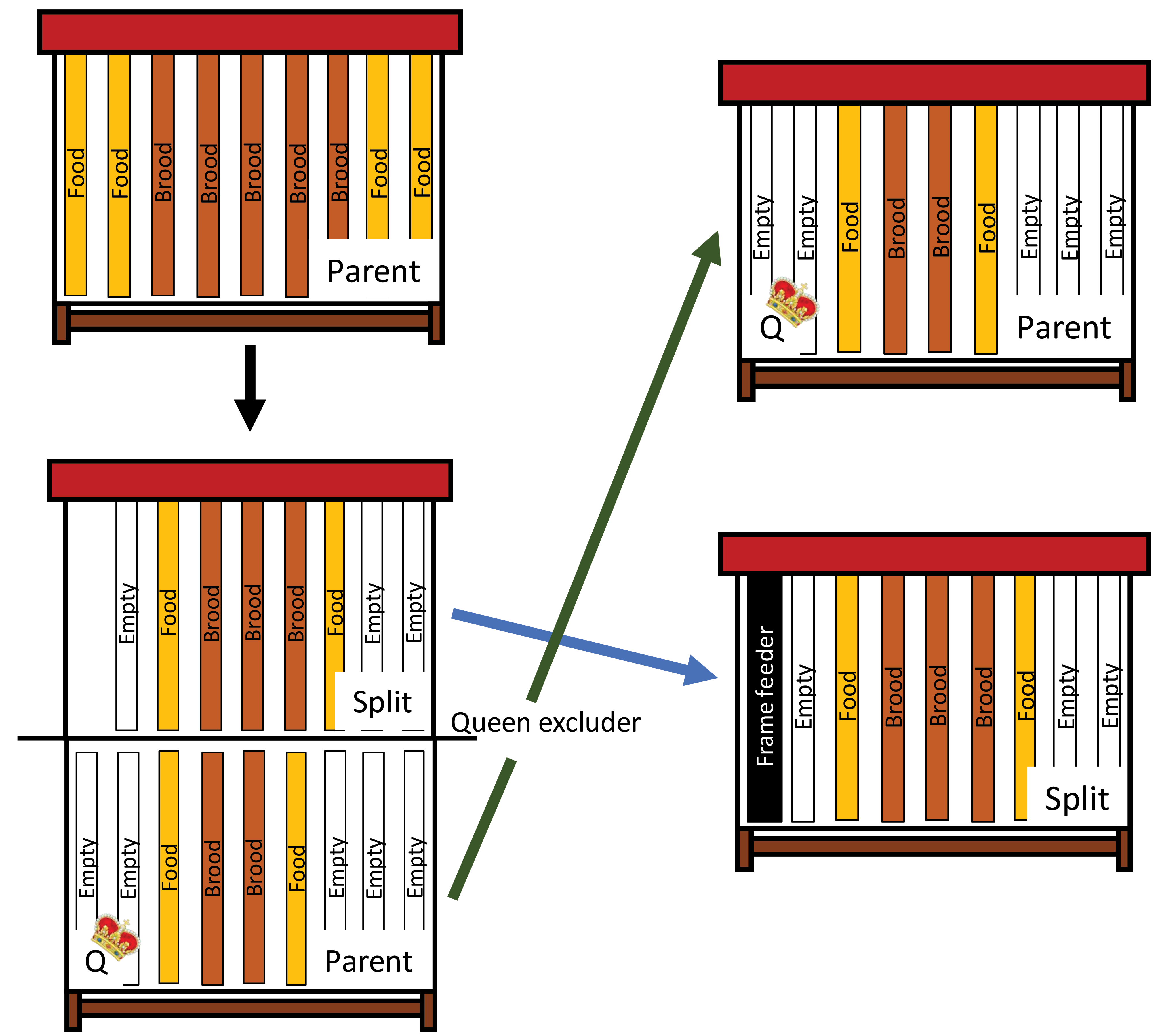 The bees will quickly move up to cover the brood, but the queen will remain in the parent colony due to the queen excluder. In about 1-2 hours the split colony can be placed on top of a bottom board and moved, possibly to another apiary. 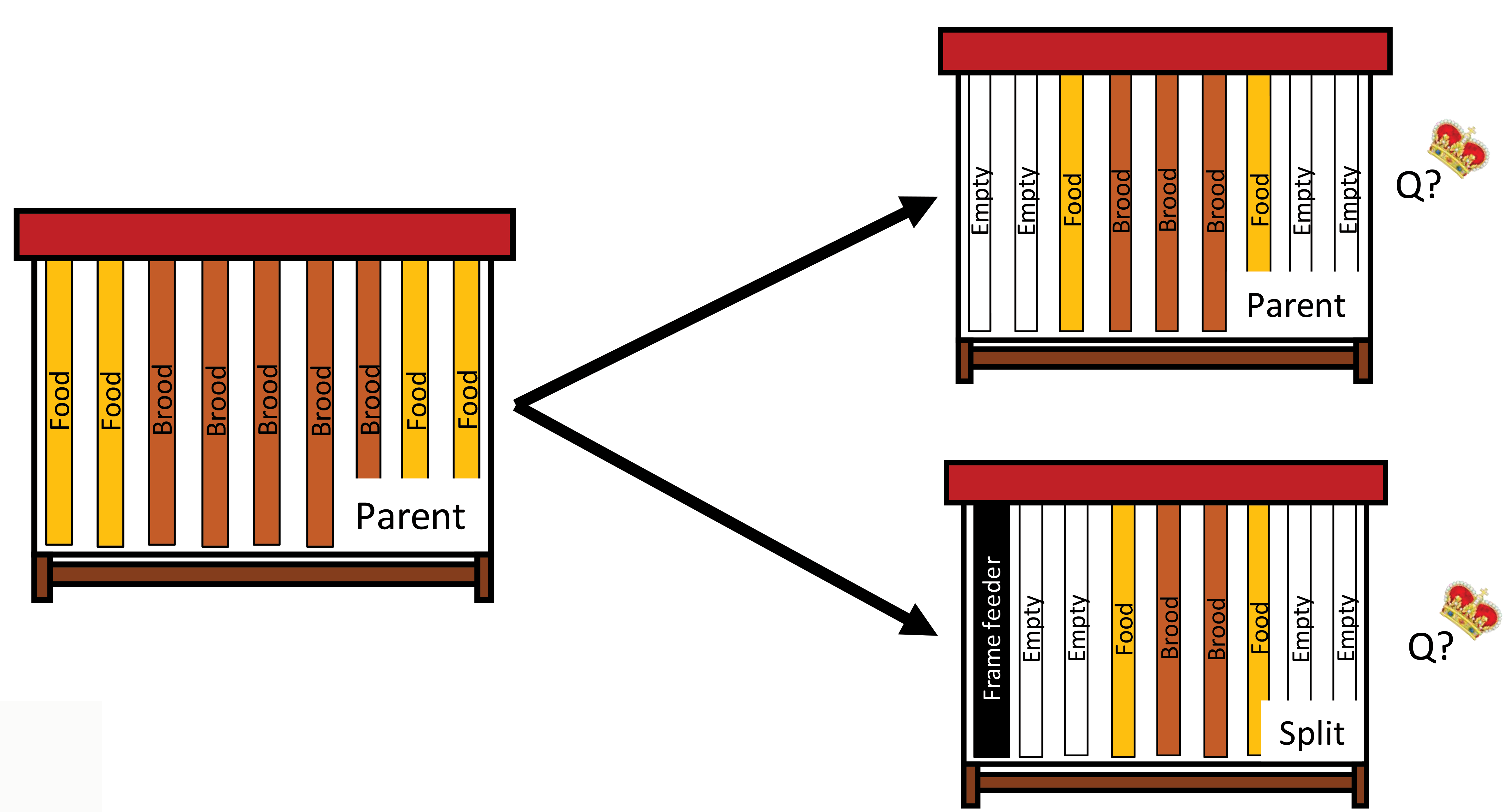 This is one of the easiest ways to do a split. This method is simple because it’s less time consuming than the two previous methods, you don’t have to find the queen, and you don’t have to come back 24-48 hrs later to add a new queen. You just need to make sure that both resulting hives have the goods to make a new queen. Ensure that both hives (parent and split) have plenty of bees and each has some eggs and young larvae. One hive will have the queen, and she will keep laying, and the other hive will raise a new queen.

This method is often used to make nucs. Here, a healthy and strong colony is divided into X number of nucs (or splits) they can produce, about 1-2 lbs packages.

What is the difference between making nucs and splits? Nucs are not intended to produce a honey crop within the same season it’s made. They are primarily made to replace winter dead-outs or to increase colony number the following year. Nucs are often made in early June, so they have time to build up before the winter. If colonies are overwintered indoors, nucs can be made at the end of June.

The probability of queen acceptance is greater in the new split colony if it’s fed sugar syrup and is kept queen-less for a day.

To install the queen using the slow release method, remove the cork from the candy end of the queen cage, and make a hole in the candy with a small nail. Be careful not to injure the queen. Slightly separate two frames with brood (in the middle of the box) and center the queen cage in the middle of these two frames with the screen facing down. Make sure the two frames are pressed tight against the cage to hold it in place. Close up the hive. Return after 5-7 days to check that the queen has been released and that she has started laying.