Notorious Nosema ceranae – what is it and what does it do?

Nosema ceranae is a highly specialized fungal parasite capable of causing disease in adult honey bees. Honey bees become infected with N. ceranae by ingesting spores of the parasite, which drift along through the digestive tract until they reach the midgut. Here, the spores fire their long harpoon-like polar filaments, and if they are lucky, will puncture a midgut cell where they can quickly inject infective sporoplasm. This sporoplasm begins to hijack the cell’s resources to grow and reproduce, ultimately resulting in the production of spores. Eventually, infected midgut cells become so densely packed with spores that they BURST open, releasing them back into the midgut where they can go on to infect more cells!

Individual worker bees infected with N. ceranae experience reduced midgut cell turnover (to extend spore growth and development), suppressed immune systems, energetic stress, and increased carbohydrate demand and consumption. Infection with N. ceranae can also lead to decreased nursing ability in young workers, risky or precocious foraging, and a reduction in lifespan. At the colony level, effects of N. ceranae are often less acute, but do vary by geographic location. For example, on the Iberian Peninsula, infection with N. ceranae is associated with an eventual collapse of colonies, while there appears to be no relationship between N. ceranae infection and colony mortality in Germany. Canada falls between these extremes, with beekeepers occasionally reporting N. ceranae as one of the factors contributing to their winter colony mortality.

Treatment options (for bees and equipment)

Nosema ceranae  is well-known in the beekeeping community for a few reasons: 1) it is globally prevalent 2) it is rather insidious, there are very few outward symptoms at the colony level, and 3) it is difficult to eradicate infections. Why are infections so difficult to eliminate, especially in a colony? Because N. ceranae spores are incredibly sturdy. They are surrounded by a thick wall comprised of three (!) layers (Fig.1) that allows them to survive outside of the honey bee for extended periods of time, even under varying environmental conditions. 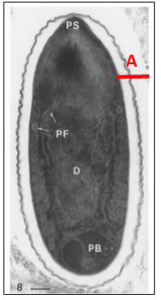 If you are looking to clean up equipment from colonies you know or suspect had a N. ceranae infection, there are a few options. In 2009/2010, the Pernal Lab at Beaverlodge Research Farm evaluated the efficacy of heat, acetic acid fumigation, and electron beam irradiation on disinfecting N. ceranae spores on comb. While all three treatments suppressed spore development in bees at specific time intervals, electron beam irradiation was determined to be the most effective of these three methods. For more information on this experiment: Integrated Management of Nosema and Detection of Antibiotic Residues. Hivelights, 23(1):23-34. 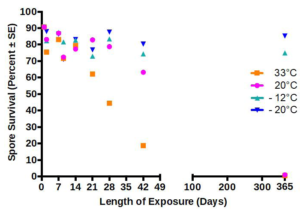 Lotmaria passim is a single-celled, hindgut-infecting trypanosomatid of the honey bee (Fig. 3). This organism was recently characterized (in 2014), and although it has been present in colonies since at least 2010, we know very little about how or if it affects bee health at the individual or colony level. However, if we look at trypanosomes in other insects, we notice very quickly that the effects they have on their hosts are similar to those that N. ceranae has on honey bees. They hijack immune systems, alter cognitive behaviours, reduce lifespan, and in bumblebees are capable of decrease foraging rate and colony size! Because of the deleterious effects trypanosomes have in other insects, it is likely that similar consequences occur for L. passim in honey bees.

Fig 3 L. passim under the microscope at 20 magnification.

Why care about L. passim?

If you’re a beekeeper, you or someone you know probably has a colony harbouring L. passim. The organism is globally prevalent, it might be parasitic, and in Canada we find it almost everywhere we look for it (Fig. 4). Additionally, we frequently see colonies infected with both L. passim and N. ceranae, and we have no idea what this duo may or may not be up to in individual honey bees or colonies. This is every researcher’s dream when the world doesn’t know anything about TWO organisms, it means they can ask whatever questions they want about them! As a PhD student in the Pernal Lab, this is very exciting for me. With the help of many lab mates, I’ve been able to ask questions about how these two organisms affect honey bee health at both the individual and colony level! 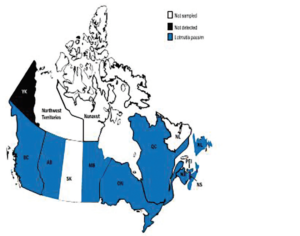 One of the first questions we asked was ‘do single L. passim and mixed L. passim and N. ceranae infections have an effect on honey bee lifespan’? We answered this question back in 2018, and the results weren’t totally what we were expecting. First, we confirmed what a number of other researchers have found over the last 15 years, which is that N. ceranae kills bees. What we weren’t expecting was for the mixed infection to have less of an effect on lifespan than N. ceranae alone, and for L. passim to have no effect on honey bee lifespan.

Still, just because we didn’t see an effect of L. passim on honey bee lifespan doesn’t mean the organism has no effect on honey bees – there could still be some sublethal effects of infection. To determine if L. passim has some sublethal effects on individual honey bees, we asked ‘does L. passim affect individual honey bee behaviour or physiology’? To answer the behaviour portion of this question, we performed a proboscis extension response (P.E.R.) experiment where we essentially asked honey bees that we had infected (by stimulating their antennae with different concentrations of sucrose) ‘what is the lowest concentration of sucrose you are willing to take right now’? They answered us by, you guessed it, extending their proboscises when we offered them a suitable concentration of sucrose. We performed this experiment because we thought if L. passim was somehow causing honey bees to become energetically stressed, that they would be hungrier, and respond more frequently to lower concentrations of sucrose than uninfected or non-energetically stressed bees. We did find that L. passim-infected honey bees responded more frequently to lower concentrations of sucrose than honey bees with mixed infections, single N. ceranae infections and the controls (Fig. 5)! 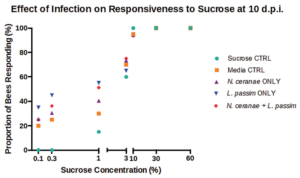 Next, we were curious about what mechanisms or changes in physiology might be causing the L. passim-infected bees to appear hungrier, and accepting of lower quality sucrose. We know that the immune system is energetically expensive to use, and that trypanosomes in other insects can stimulate their host’s immune systems. So, we wanted to know if infection with L. passim stimulates the honey bee’s energetically costly immune system, potentially making the bees hungrier, and more likely to choose lower quality sucrose to cover the cost of activating it. We inoculated honey bees with single and mixed L. passim and N. ceranae infections, and sampled these bees to evaluate five components of the honey bee immune system. Unfortunately, this experiment won’t be finished until the spring, so the earliest chance for an update might be Bee Day at Beaverlodge!

Lastly, I had mentioned earlier that we are interested in how N. ceranae and L. passim affect bee health at both the individual and colony level, but until now all I’ve done is tell you about what we’ve done in individual bees. At the colony level, we’re interested in how infection affects a number of physiological and behavioural traits. Last summer, we paint-marked and hand inoculated 1,200 bees (it was a long day), and released them into nucs. I watched the nucs for 30 minutes every day for 3 weeks to determine: age onset of foraging, number of returning painted foragers, and collected pollen and nectar loads from painted foragers partway through the experiment to measure foraging effort. This is experiment is currently unreplicated, so you’ll have to stay tuned for an update!