By Renata Borba and Emily Olson

There are 18 known viruses that afflict honey bees. In strong healthy colonies, viruses at low levels typically do not cause major problems. However, when combined with co-stressors such as low access to adequate food sources, environmental conditions, or other diseases/pests, the effects are exacerbated and can lead to colony mortality.

What are the most common viruses?

Chronic Bee Paralysis Virus (CBPV) is less common, but studies have shown that there is a positive correlation between CBPV and colony overwinter mortality.

How do bees become infected?

Bees can become infected by viruses via 2 transmission routes: horizontal and vertical transmission.

Varroa mites are a major mechanical vector of several honey bee viruses. In other words, mites can acquire viruses when feeding on the fat body or hemolymph (‘bee blood’) of infected bees and transmit these viruses to a healthy bee by feeding on them shortly after. There is also abundant evidence that mites are an effective biological vector to viruses, since some bee-viruses are able to multiply inside Varroa mites. For example, DWV and VDV can be transmitted by mites during feeding activities from an unhealthy bee to a healthy bee, and also replicate/multiply while inside the mite. In this case, the mite functions as both a mechanical vector and a biological vector to DWV and VDV, which is the reason why Varroa mites are considered the most damaging parasite to honey bee colonies. Varroa mites also weaken bees’ immune systems, making them more susceptible to infections. 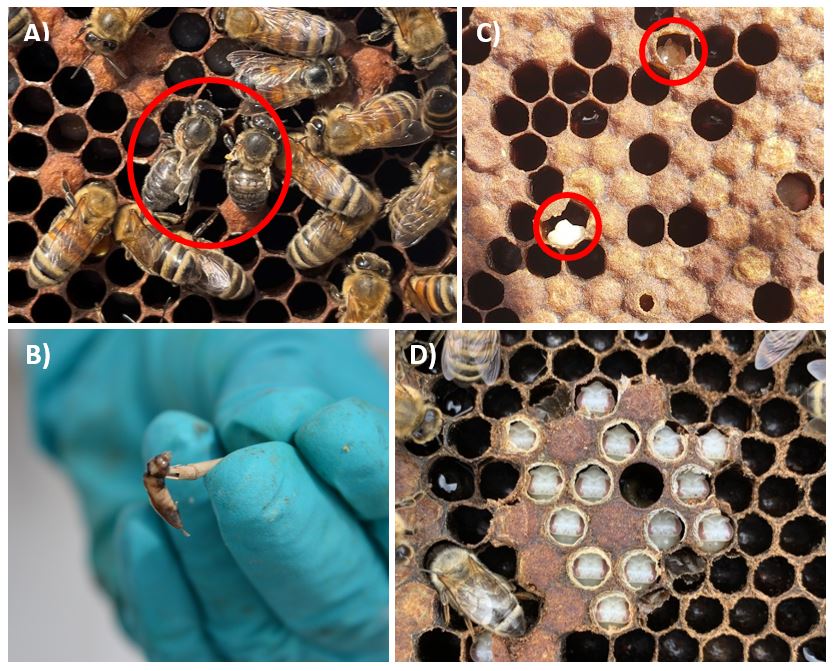 Figure 1. Visual signs of viruses and varroa infection. A) Bees with deformed wings, a sign of Deformed Wing Virus (DWV); B) Grey/yellow larvae, a sign of Sacbrood virus; C) Chewed out and sunken larvae, often observed in colonies with high mite and viral infections, defined as a Parasitic Mite Syndrome; D) Uncapped pupa cells, also associated with high mite and viral infections and defined as a Bald brood.

How are viruses detected?

It is difficult to detect a viral infection as visual symptoms are not always present in an infected colony. An asymptomatic infection can become symptomatic if a colony is stressed as a result of environmental conditions, transportation of colonies (e.g., pollination), or other diseases/pests. Visual symptoms are a sign of high viral loads, but often coupled with presence of multiple diseases which causes difficulties diagnosing. To detect the presence and to quantify virus load in colonies a live bee sample can be collected and sent to a diagnostic lab for testing.

Since virus infections are associated with varroa mite infestation level, mite levels can be a good indication of virus levels. However, viruses can also be detected in a colony even when mites are controlled for multiple years. This can occur when mite populations are controlled/treated after being uncontrolled/high and viral levels, consequently, also high. In this case, although the mite population can be reduced by the use of miticide treatments, the viral population will not be affected by the treatment and will remain and continue to replicate within the colony.

How do viruses affect honey bees?

In the past, many viruses were considered harmless to honey bees. However, the increased prevalence of varroa mites has resulted in more effective virus transmission. This has serious consequences for the productivity and longevity of honey bee colonies. A virus will often occur in conjunction with other viruses or diseases. Therefore, one virus will not usually result in the death of a colony, but a combination of other diseases and factors will contribute to colony mortality.

Parasitic mite syndrome (PMS) is caused by the culmination of viruses and varroa mites. Bees will attempt to remove highly infested larvae, leading to chewed out or sunken larvae, bald brood, and spotty brood. Visible mites on adult bees and in brood cells are also an indication of PMS. Symptoms may also look like early signs of chalkbrood or European foulbrood.

How are viruses controlled?

Unfortunately, there are no available treatments for honey bee viruses. Controlling mite populations is the only recommended strategy to suppressing viral loads. This allows levels of associated viruses to decrease over time through the normal turnover of bees. Maintaining strong colonies, eliminating stressors such as food shortages and other diseases will ensure your bees remain healthy.

Management practices to reduce viral loads also include: 1) replacing the queen (as a way to remove virus vertical transmission), 2) cleaning/ sanitizing equipment between apiaries and after working with symptomatic colonies (hive tools, gloves, dead outs), 3) replacing old frames, 4) replacing symptomatic colonies from the apiary and moving them into a ‘hospital’ yard.