Highlights from the 46th Apimondia International Apicultural Congress in Montreal

The Alberta Beekeepers Commission was proud to represent the Alberta beekeeping industry at the 46th Apimondia International Apiculture Congress and ApiExpo event in Montreal in September. Together with beekeepers, honey producers, researchers, industry professionals and other delegates from across the globe,Apimondia was an amazing opportunity to learn, network, explore trade opportunities and share expertise.

The Alberta Beekeepers Commission booth at Apimondia 2019 in Montreal.

The ABC booth was located in a great spot on the trade show floor. This prime location encouraged beekeepers, scientists, buyers (import/export) to stop by and learn more about beekeeping, honey and honey products in Alberta. ABC had a beautiful display of honey products and honey treats to handout, including samples of Alberta honey, English toffee made with Alberta honey, and ABC bee pins, bringing trade show participants back to the ABC booth several times throughout the week.

With more than 5,000 people attending Apimondia, traffic to the ABC booth was non-stop.

A number of the contacts made during Apimondia, have expressed interest in either attending the Convention or participating in the tradeshow, and we look forward to seeing them at the convention in November.

Brief overview of the Scientific Program

The 46th Apimondia International Apiculture Congress highlighted the excellence in bee research and beekeeping industry in Canada and worldwide. The scientific presentations were divided into five separate conference rooms and ran concurrently, with delegates selecting sessions from a selection of categories including biology, bee health, pollination, economy, technology, apitherapy, and development.

During the four days of scientific presentations, we had the opportunity to hear the most recent science on honey bee biology, queen rearing, breeding, genomics, pathology, pesticide resistance, pollination and many other topics, including Canadian beekeeping!

Let’s dig into some of these topics… Starting with the most important member of the colony, the queen!

As we all know, the queen is essential for the proper functionality of the hive. But even more important than her is the sperm that she carries inside of her spermatheca.

‘What can affect the queen’s sperm count and viability?’. This question was addressed by a few researchers. Long transportation time (e.g. from New Zealand to Alberta) can have an effect on the queen’s sperm count and body weight (S. Hoover), and viability (P. Wolf-Veiga). In addition, exposure to high temperature during transportation (40˚C or higher) can significantly reduce sperm viability and up-regulate the expression of heat-shock proteins in the spermatheca of heatstressed queens (A. McAfee).

Although queen sperm viability is important, and often translates to good colony performance (P. Wolf-Veiga), we also learned that queen pathogen load (i.e. viruses, chalkbrood) can affect her performance and consequently, colony strength (S. Hoover). A challenge in queen rearing that Canadian queen breeders often face is the short duration and late start of the local breeding season. This challenge can be potentially addressed by implementing management practices that allow for the overwintering of queens in “queen banks”. Research from Quebec (A. Rousseau) showed that queens overwintered in queen banks stored in a temperature-controlled room at 15- 18°C had over 80% survival rate and optimal sperm viability.

We all know the importance of treating our colonies for mites and having management practices in place to maintain low levels of pathogens and parasites. However, as important as treating is mitigating cross-contamination among colonies via sharing of contaminated hive products.

Research from Switzerland showed that hive products (i.e., wax, honey and pollen) can be good source of Nosema ceranae and Crithidia mellificae infection and that the exchange of bee products from a diseased colony to a healthy colony can significantly contribute to the spread of these pathogens (O. Yañez). Beekeepers can easily assess for mite levels in the field, check for the presence of visual signs of Nosema, chalkbrood and bacterial infections, but virus infections rarely show a visible sign and often go unnoticed. Research findings showed that high viral titers (DWV-A, DWV-B, BQCV, SBV) are associated with high colony winter mortality, regardless of the wintering method (indoors or outdoors; S. Pernal). It is possible that susceptibility to viral infection is driven by the bees genetics (M. Simone-Finstrom), and that resistant (or less susceptible) lines may be “better” at mounting an anti-viral response, using key genes associated with anti-viral response (M. Flenniken), compared to susceptible lines. New information on emerging parasites were also shared, including Lotmaria passim (C. MacInnis) and tropilaelaps mite (S. Ramsey).

It’s easy to focus on questions that target mainly the pathogens, such as “how does this pathogen affect colony performance/ survival”, “how do I treat for this pathogen” and so on… But the truth is that nature has made bees very resilient. Honey bees have evolved remarkable abilities to counter pathogen challenges via dynamic defense mechanisms at both the individual (individual immunity) and colony level (social immunity – collective behavioral defense mechanisms that assist the immune system of individual bees). 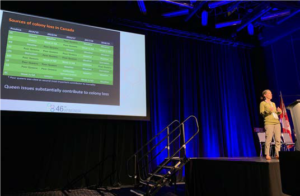 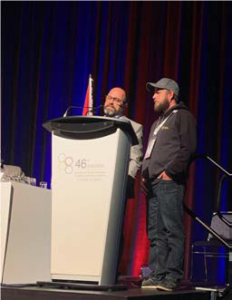 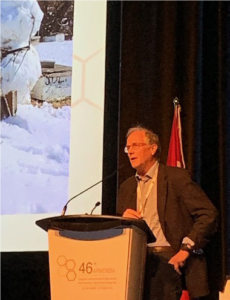 A couple symposiums were also dedicated to the impact of pesticides on bees. One heavily studied class of pesticides are the neonicotinoids. Neonicotinoid insecticides are used in coatings on most corn and soybean seeds, and its residues may persist in plant tissues for a long period of time. Several studies showed recent findings on the negative effect of neonicotinoids on bee reproduction (G. Williams), behavior (grooming; N. Morfin) and health (N. Tsvetkov).

Research has shown that when bees have access to good nectar and pollen, they ingest dietary phytochemicals that help them fight off diseases and detoxify certain pesticides. When honey bee colonies are used for crop pollination, they are often exposed to pesticides at a higher concentration than in non-crop pollination areas. However, the food source of colonies in crop pollination is generally limited to a single crop, which may lead the hive to become nutritionally stressed due to the lack of diversity in food sources. Research from Australia (M. Kratz) showed the importance of a diverse food (nectar and pollen) on colony health (parasite loads, foraging activity of workers and brood development) during crop pollination, suggesting that food supplementation may help minimize negative effects associated with crop pollination.

Alberta was well represented at the Canadian Beekeeping symposiums! A big shout out to Jerry and Michael Poelman, and Kevin Nixon for highlighting the Alberta beekeeping industry so well. It is nearly impossible to summarize and give the proper credit to all 300+ presentations. Therefore, I highly recommend you to go to www.apimondia2019.com/wordpress/wp-content/uploads/2019/09/API_abstractbook.pdf and download the conference abstract book.

I hope to see you in Russia in 2021 for the 47th Apimondia International Apiculture Congress!