By Jeff Kearns and Renata Borba

When Alberta beekeepers need to re-queen a colony in early spring their options are limited. Breeding local queens at this time of year, while it may be technically possible given the right conditions, is not feasible, especially on a large scale. The only reliable option available to beekeepers is to purchase imported mated queens from locales such as Hawaii, California, New Zealand, and Australia.

One of the downsides to the option of purchasing imported queens is that the supply chain can be halted for a number of reasons. During the 2020 season, two events made it abundantly clear that Alberta beekeepers need to find alternatives to relying on imported queens: 1) COVID-19 caused a significant interruption to the supply of live bees and queens exported to Canada; and 2) the purchase of queens from California was suspended for a short period because of the risk of importing queens that had mated with Africanized bees.

An alternative option that could help supply Alberta beekeepers with locally raised queen bees in the early spring is to produce and mate queens in the summer and store them in queen banks over winter months. The Alberta Tech Transfer Program, in collaboration with Dr. Shelley Hoover’s lab, is conducting a research project with the purpose to provide proof of concept that overwintering queens en masse is feasible in Alberta, develop a prototype management strategies for mass overwintering queens in Alberta, and validate the performance and quality of overwintered new summer-mated queens.

A total of five queen banks were established in late August in two locations, Lethbridge and Edmonton. To ensure that queen banks had similar population size, colonies were evaluated for strength and two strong double brood chamber colonies were combined to create a four brood chamber queen bank (Fig. 01). Selected double brood chamber colonies had the queens removed prior to being combined, and two frames removed from one of the four boxes to create space for the queen cages to be added. Summer-mated queens used in this study were either purchased from local beekeepers or reared by the research team. 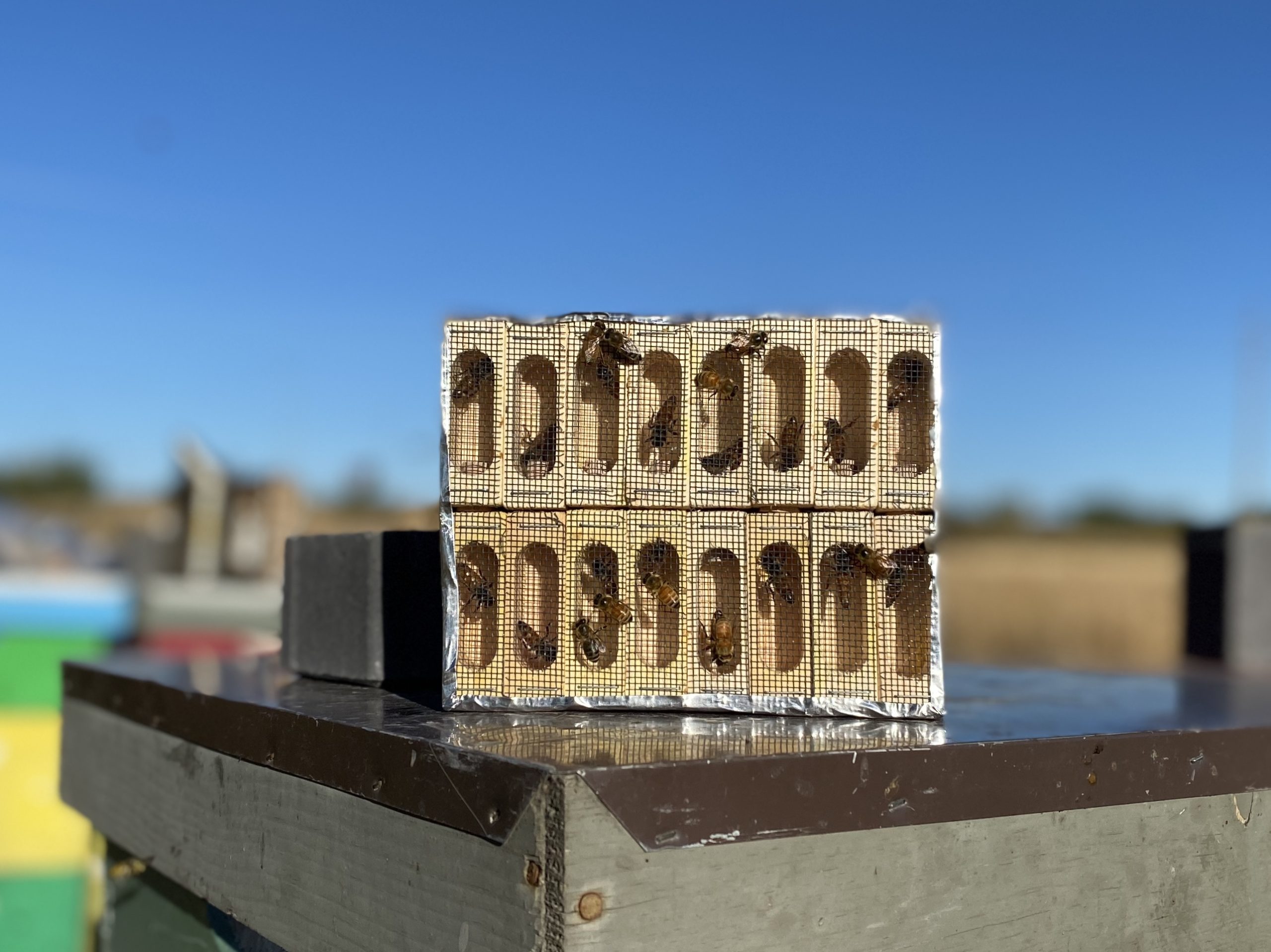 Queens were banked in California-mini cages, in double rows of eight (top-bottom) and wrapped in foil tape creating a “queen cage block” (Fig. 02). Each queen bank housed 32 queens in two queen cage blocks, containing 16 queen cages each, facing each other. Each queen cage block was placed in the centre of a frame by scrapping a rectangle of an approximate size of 6”x5” (Fig. 03). Queen cage frames were then placed in the middle position of the colony with queen cages from both frames directly facing each other (aka “book-matched”), with sufficient bee-space left between them.. An additional of four queen cages per bank were placed near the queen cage block and were removed from the banks before colonies were moved indoors. These additional queens were sent to the NBDC for queen health assessment and serve as pre-winter banking queen health reference. In April, a subset of the surviving queens will be sacrificed for post-winter evaluation of queen health. 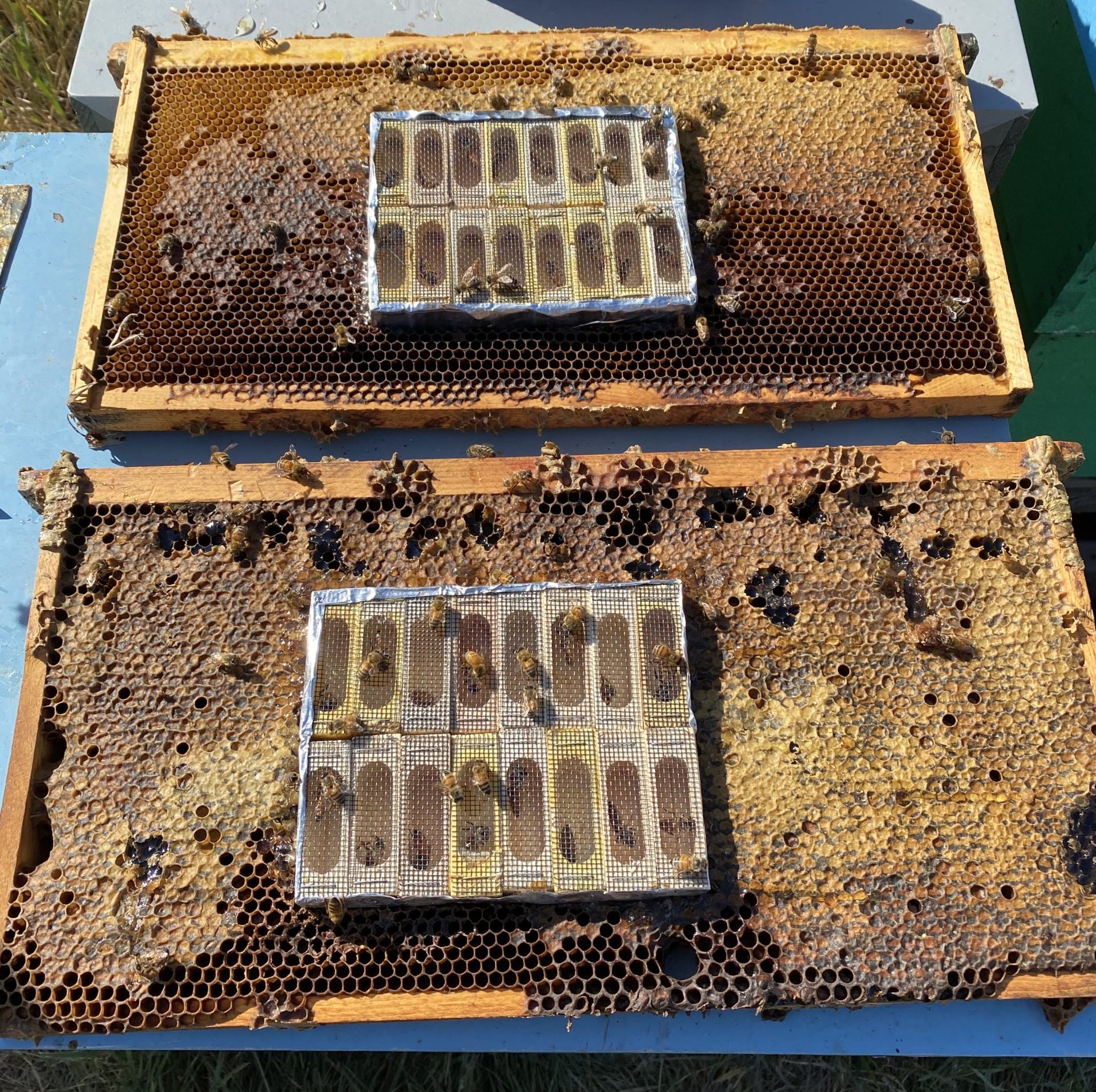 Once queen banks were established, colonies were provided with sugar syrup (2:1) in a top hive feeder and a 1lb pollen patty was placed directly above the queen cage frames weekly. Each queen bank also received one ApiVar strip per five frames of bees in all boxes, as a management practice for mite control.

In late September, prior to moving the queen banks indoors, ApiVar strips were removed and each bank was reduced from four boxes to two boxes, with the box housing the queen cages placed on the top. As a measurement of colony strength and health before the winter, each bank was weighed and a sample of bees for Varroa and Nosema assessment was collected. Additionally, internal data logger devices were placed on top of frame directly below the queen cage frames to record the internal colony temperature from each queen bank throughout the winter as a tool to assess the colony overwintering performance. During the 7-month storage period (mid-September to mid-April), queen banks are being kept in environmentally controlled rooms at 15-18 °C.

In addition to overwintering successfully, stored queens must be of high quality and show good performance. When colonies are re-queened with queens that have been stored for several months, the queen should be accepted by colonies and should not show inferior egg-laying performance relative to queens overwintered in their own colonies or newly mated queens. A subset of summer-mated overwintered queens will be introduced to new colonies in the spring of 2021. The performance of the overwintered queens will be assessed throughout the summer during the winter of 2021-22, and compared to the performance of newly-mated imported queens. Stay tuned for more updates on this research!